Multilingual Documents have been added to the system to include both customer facing and warehouse/installer facing. This feature must first be enabled in the Company Control 4 screen, under Allow Multilingual Translation. You can also set a default language at that control setting. There are currently twelve languages available as follows: Chinese, French, German, Greek, Haitian Creole, Hebrew, Italian, Portuguese, Russian, Spanish, Tagalog, and Vietnamese. More languages will be added in subsequent updates and any language can be requested via support@rmaster.com. The server-side graphical documents impacted include the following: Printed Quotation, Customer Receipt, Sales Agreement, Invoice, Batch Invoice, Work Order and Batch Work Order. The graphical Printed PO will also translate PO Notes. On each of these documents, you will see a Translate Notes checkbox in the Print screen that will need to be checked prior to printing as follows:

The default language will prompt, but you can use the drop-down box to switch to another language when applicable. Any Notes and Special Instructions, Line Comments, and additional Comments added from the Print screen, along with COD info on the Work Order, will print in both English, as per usual, with the selected language translation appearing below. The translated notes will print in one long paragraph, rather than in stacked comments, like their English counterparts. Below is an example of Translated Notes in Spanish on the Sales Agreement: 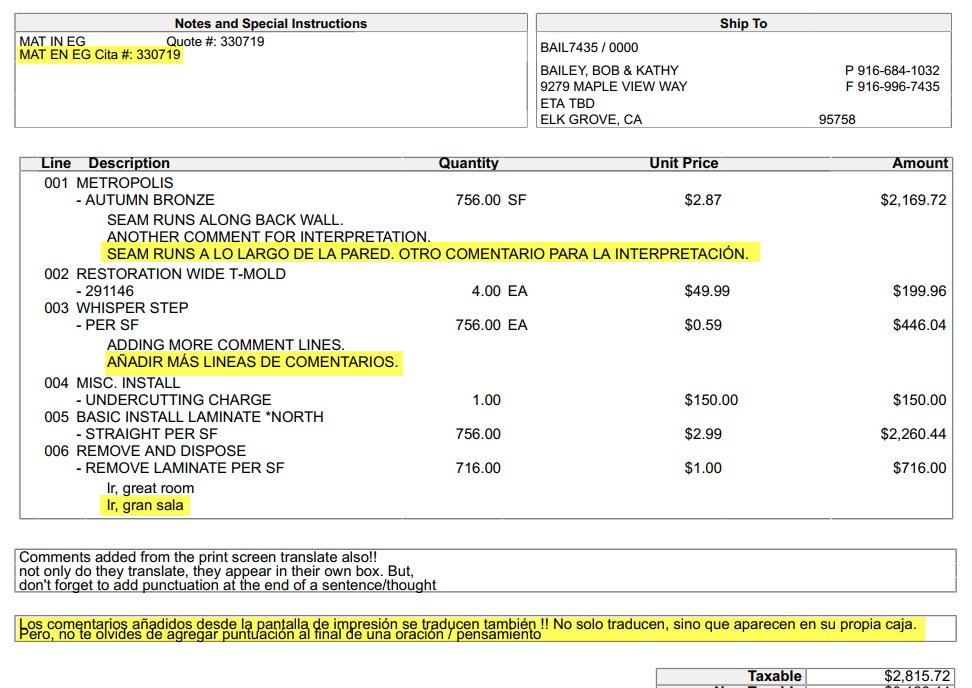 Multiple translated lines will print in one long paragraph under the last Comment Line to conserve space, so you will need to use punctuation at the end of a sentence or thought to improve readability.